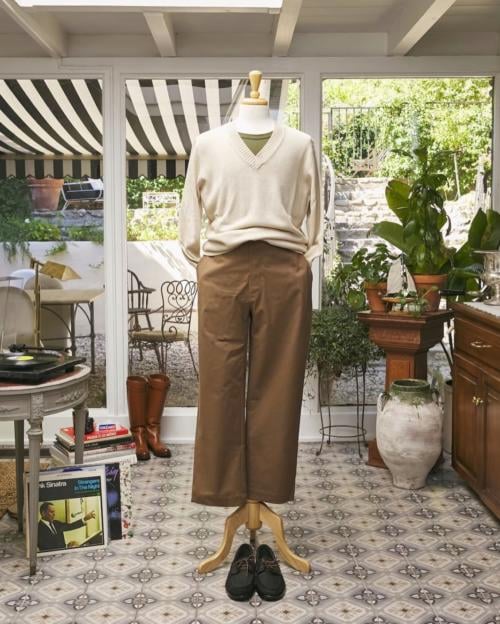 In the past year Davide Baroncini, of knitwear brand Ghiaia, has been putting together and posting some looks that really resonate with me.

Comfortable and relaxed, but with a really high taste level, they seem a long way from both the hype-driven and overly tight looks elsewhere. They’re deceptively simple: a few colours, classic pieces, but put together in a way that feels fresh and easy.

I first interviewed Davide three years ago, soon after Ghiaia launched, but we didn’t have a chance to talk style – indeed, back then he didn’t post much about it, as his whole collection was sold through one department store and there was no e-commerce to promote.

So we arranged a time to talk over video, to discuss his style and what influences those looks. 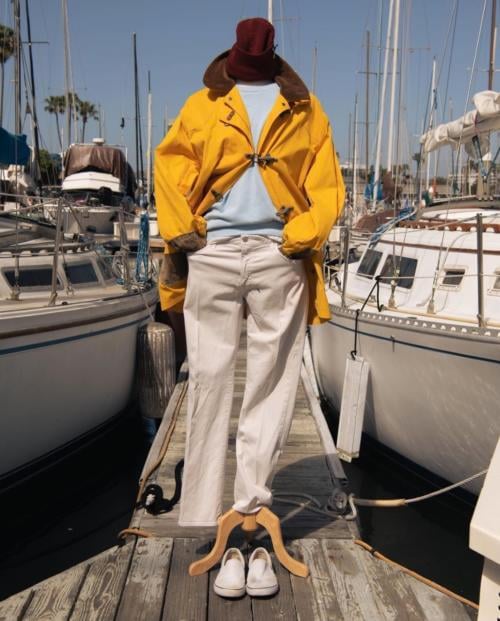 Davide was in his house in California, where his wife and family had recently moved into, and actually the house his wife had grown up in. We spent a good few minutes talking about daughters and our respective families as a result, before getting into clothes.

“Both those things deeply affect how I dress though,” he says. “Moving to California was a big influence, as was being a father.

“In the US it’s much more of a thing to be a ‘Dad’. In Milan or elsewhere in Italy this doesn’t really happen. Here a dad has a different persona – he plays more, he does everything. The clothes reflect the fact I’m always running around picking things up, or playing with them.

Growing older makes you more relaxed too, he says, and I agree.

“When you’re young you’re so uncertain about everything – you need clothes to be perfect to have confidence in them,” Davide says.

“Professionally I grew up in Milano, and there it was particularly cruel. You’d show up to work, or to a family event, and if you weren’t dressed right you’d get a metaphorical slap in the face with a glove: ‘What’s that you’re wearing? What’s that button doing? Come on, get it together’. Everyone knew the right way to dress, and they weren’t afraid to tell others off.” 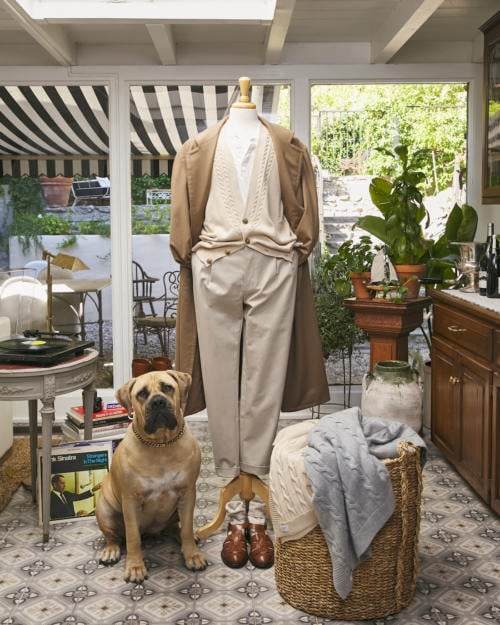 It feels a long way from Davide’s sunny TV room, which is where the look above was shot. What does that particular combination mean to him?

“This one feels like late summer, early autumn,” he says. “And it’s the kind of outfit I’ll wear all day long. I’m more comfortable with that now, living in America – I’ll go to the store in the morning, come back and work, go and see friends in the evening. In Italy I’d change but not here.”

The knit is Ghiaia’s cricket cardigan, quite loose and with a deliberately deep opening. The coat is there less for warmth (it’s California after all) and more just to have something, to have something.

“You know that feeling when you leave the house and feel you need something in your hands? Or like a politician, that needs to hold a pen or a piece of paper when they’re making a point. This is the same, the coat is something to have over the shoulders, or to carry. I feel more comfortable that way.”

“Oh and if you like the coat, watch Boomerang with Eddie Murphy. Man he looks good in that film.” 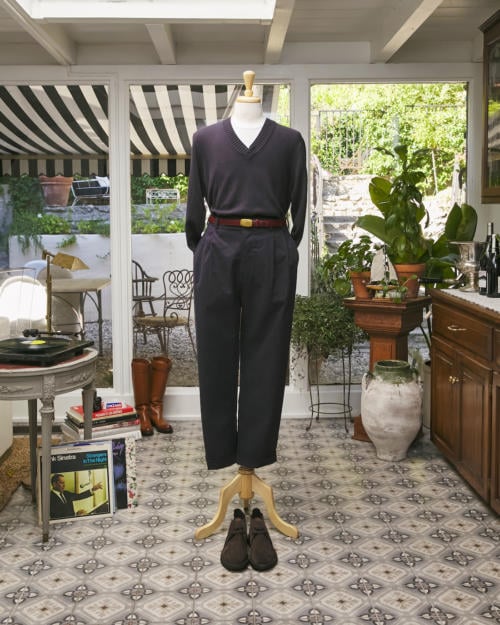 There’s a fair amount of Armani in Boomerang, and this second outfit feels particularly Armani.

“Giorgio wears navy on navy a lot, and it’s always elegant, always really clean. I always like to separate the two with a belt though.”

The V-neck knit is cotton, and this is relevant. “We sell cashmere and we sell cotton, but there’s something about a cotton knit that looks nice and old – elegantly aged – as soon as you put it on. Nothing looks more relaxed to me.

“I could do a day meeting in this, and roll my sleeves up; but wear it in the evening as well, maybe comb my hair back. Also I’m about 40 pounds overweight right now, so anything that hides the weight is good! Baggy pants and a sweater are the best.” 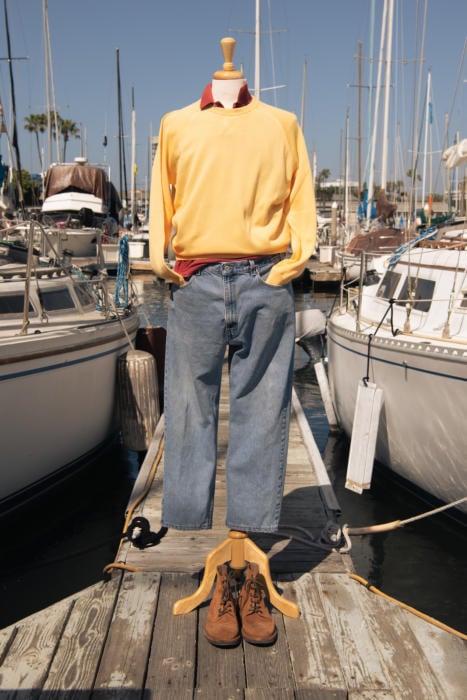 These outfits are ones I picked out from Davide’s feed because I liked them personally, or because I felt there was something unusual there to explore.

With the outfit above, I found the red and yellow interesting – they look great together, but the combination isn’t that classic. It’s not something I’d naturally do.

“You know what works there? The dustiness of the materials. If that were a silky knit or a superfine polo, it wouldn’t work. But they both look soft, washed out.

“That’s probably the greatest skill of a yarn supplier – their ability to colour the yarns in very specific ways. It’s really hard. It can change a knit from looking cheap and shiny, to dusty and deep.

“I’d say that apart from their harmoniousness – whether they’re both warm or cold – this is the most important thing for me in putting colours together.”

The overall look, for Davide, is Steve McQueen: practical, easy, riding his bike around the coast and then swimming in the sea. An elderly neighbour in Pasadena tells a story of seeing McQueen do just that.

Davide was obsessed with McQueen as a kid, and illustrates with a different story, of riding his Triumph from Milan to Amsterdam over a weekend, to start a job with Suit Supply. He arrived at 3am, freezing cold, almost hypothermic. It was the stupidest thing he’s ever done – but he felt like McQueen. 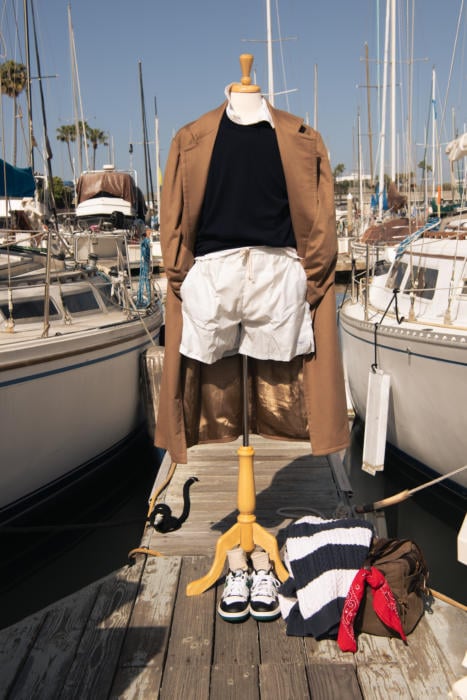 This next outfit is someone rather different. “This is a rich dude, LA all day long. He doesn’t give a fuck. He’s old money, done this forever, and genuinely doesn’t care,” says Davide. “The line between trying very hard and not trying at all, in a look, is very thin. But this guy legitimately doesn’t.”

He continues: “There aren’t many cities in the world where you can wear this. If you wore it in Milan, people would think you were crazy, or a tourist. But if you come to LA you’ll see a guy like this every day – on Paradise Cove in Malibu, popping out of a vintage Speedster with a big hairy dog.

“The look is rather messy, but it’s very conservative too – a navy crewneck, white shorts, camel coat. It’s all about the attitude, wearing a long coat over short shorts just because you need something in the morning.

“It can be quite chill here actually, by the water, even in the summer. Thank God, or I wouldn’t sell anything from May to September”

If you like these kinds of outfits as much as I do, the best way to see them all is actually on the shop page of the Ghiaia website here. 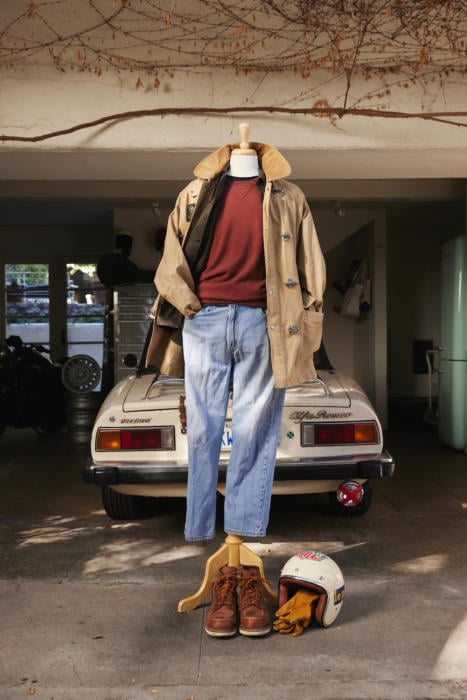